There are a slew of actions that players can take whilst in combat that can help them do a multitude of things from aiding in battle to avoiding it altogether. However, I feel that although some of these rules as written (RAW) get the job done, they often feel subpar, uninspired or even a little overpowered so I thought it would be interesting and fun to take an objective look at all the D&D rules and propose variant rules.

Being a big proponent of actions and consequences, I have come up with some ideas that fit within this mold making these actions less of a "sure thing" and more chaotic. To allow for multiple levels of fun, I came up with three tiers of increasing complexity that the DM (with their players) can decide to use.

That said, let's take a look at the Dash action.

Dash
When you take the Dash action, you gain extra movement for the current turn. The increase equals your speed, after applying any modifiers. With a speed of 30 feet, for example, you can move up to 60 feet on your turn if you dash.

Any increase or decrease to your speed changes this additional movement by the same amount. If your speed of 30 feet is reduced to 15 feet, for instance, you can move up to 30 feet this turn if you dash.

This is fine as written for quick and simple combat and it makes sense - your character uses their attack action to move twice as much - but it's a little boring and uninspired and maybe even a little overpowered if we think about it.

DM: It's your turn: what do you do? Player: Uhhhhh... I run. Player then proceeds to move the character up the hallway 20 feet, takes a right and runs 40 feet only to change their mind, turn around and run back 20 feet and hug that corner in hopes of gaining cover for their attack next turn.

In that scenario the player has made one 90 degree turn and one complete 180 degree turn before finally coming to a stop. There's no doubt the character would have slowed down or even come to a complete stop within that time making many dashes, but by definition the player didn't do anything incorrect in their action. This RAW Dash is very lenient on the player and therefore can be considered our easy ☠ variant as there isn't going to be anything easier than that.

Now, before we dive deeper into this action and get carried away in technical details, let's take a look at what the word dash actually means from the Merriam-Webster dictionary. 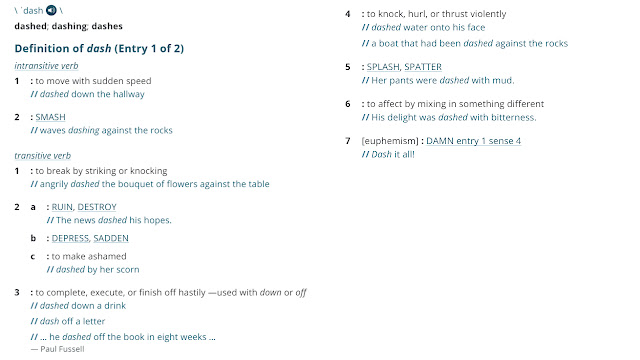 What we see is truly interesting! In all uses of the word it is referenced not only with speed but with force as well which would make one assume that the Dash action should not only be used for fleeing, but for some sort of attack as well. That said, what kind of attack would make sense with the Dash action? Well, it wouldn't be a damaging action since we are giving up our Attack action to be able to dash so the only thing that makes sense is an action of force, of course!

If we ran down a hallway and there was somebody in our way, we would most likely (at the very least) have a chance to knock them down by use of blunt force. Why doesn't this apply to the Dash action as well? This plays into the force idea in the dictionary definition we see above, and we could easily incorporate the rules for Shoving a Creature (page 195 of the PHB) into this.

Shoving a Creature
Using the Attack action, you can make a special melee attack to shove a creature, either to knock it prone or push it away from you. If you’re able to make multiple attacks with the Attack action, this attack replaces one of them.

This is excellent, but to make it work we can not have our character freely running around, right? Yatur the Orc Barbarian shouldn't be able to Dash 30 feet and knock someone over, then turn to run another 30 feet to knock someone else over without limitations. That would be overpowered, so let's restrict the movement.

From what I've been writing it has been the act of turning while dashing that seems to give me pause, so why not make it more difficult for the player to do? This could play into our medium ☠ ☠ and hard ☠ ☠ ☠ tiers!

For our medium ☠ ☠ tier we can make it so that the character can change direction while performing a Dash action just like in the (RAW) rules; However, in order to do so they must make a Dexterity (Acrobatics) or Strength (Athletics) check to stay on their feet, but what's the Difficulty Check (DC) going to be? The average seems to usually be set at 10 but Dexterity and Strength are two of the most common attributes, and if you're taking a Dash action toward an enemy with the intent on knocking them over you're more than likely going to have these notched up a bit so let's up the opposition to a DC 12 for normal terrain and a DC 15 for difficult terrain. If you fail, of course, you will fall prone.

For our hard ☠ ☠ ☠ tier we continue the movement rules from the earlier tier, but now we add the Shoving a Creature rules. Here, the player can Dash up to double their normal walk speed in a line they choose (following the rules), and they have a chance to knock down or push enemy as long as the enemy is in the dash path. If the player succeeds at knocking down or pushing an enemy and they have movement left, they can choose to stop where they are or continue along this path up to their maximum Dash movement. If there are more enemy along the path, the player is able to attempt to knock them down as well.

However, every rose has its thorn, and this is no different. There needs to be a negative to this otherwise the player has no reason to not run through all the people in their path, so if the player fails at Shoving a Creature they will be knocked prone or pushed back five feet the direction they came from. Tit for a tat.

One may question what happens with an Opportunity Attack (page 195 in the PHB), and the new Dash mechanics could definitely interfere with this:

Opportunity Attacks
In a fight, everyone is constantly watching for a chance to strike an enemy who is fleeing or passing by. Such a strike is called an opportunity Attack.

The key phrase to pay attention to is, "You can make an opportunity attack when a hostile creature that you can see moves out of your reach." Upon sucess with the Dash mechanics the enemy will be pushed back five feet or knocked prone. That means if the player moves out of the reach of a prone enemy, this would instigate the enemy's Opportunity Attack with disadvantage.

Continuing on, upon failure the player will be either themselves knocked prone or be pushed back five feet out of range of the enemy. This will not instigate the enemy Opportunity Attack so we are good here.

So, we add a line giving the enemy an Opportunity Attack if the player chooses to continue their movement and we have our three tiers:

So what do you think? Hogwash? Hogwarts? The variants I described add a lot of complexity onto the otherwise simple Dash action which won't be for everyone, but the great thing about variant rules is that you don't have to use them if you don't want to. However, for those who want more complex actions, I think these will add a new level a strategy onto their game.