One Night in the City - Cloudpunk Review 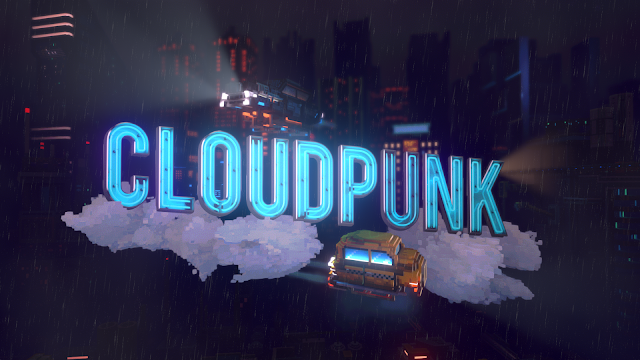 Cloudpunk is a solid cyberpunk delivery service game that pulls the atmosphere and mechanics from cinematic staples such as Luc Besson's The Fifth Element and Ridley Scott's Blade Runner, but does it succeed as an interactive video game that is it worth your time and money?

Cloudpunk is a good game, but not great.

I came across Cloudpunk while randomly trolling Instagram for inspiration - i.e. searching for "cyberpunk" - and found developer Ion Lands page. I was instantly hooked. The atmosphere captured in those photos and short videos projected a unique environment and gameplay that hit on a lot of the cyberpunk ques projected in media up to that point.

The idea of driving around this colorful and lively world as a lowly delivery driver was something that really grabbed hold of me. In my opinion, almost every good story puts you in the shoes of a nobody that goes on to do something spectacular: Frodo in The Lord of the Rings, Doomguy in the original Doom series and Korben Dallas in The Fifth Element all fit this mold. They were all just "average joes" that were going about their daily business when they were pulled into their grand adventure. Cloudpunk seemed to fit that mold to a T. 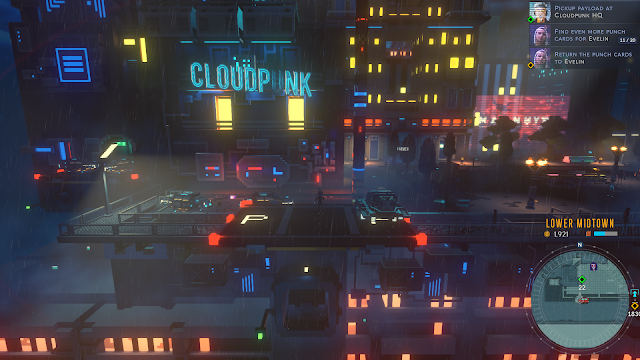 You take the role of Rania, a driver for the company Cloudpunk - a delivery company that, much like Frank Martin from The Transporter, doesn't ask what's inside the package being delivered; only where to pick it up and where to drop it off. Of course, as things go in these situations, most of the time you will be informed of what is inside the package by the sender or receiver regardless of your discretion.

You will be spending a large portion of your time in Cloudpunk driving (hovering) around the city above the clouds in your HOVA (hover car) doing various deliveries for the company, all given to you by Control - your contact in Cloudpunk. He is a mysterious man who will not give you any information about himself, nor want any from you. Again, this will eventually change as time and the story goes on. 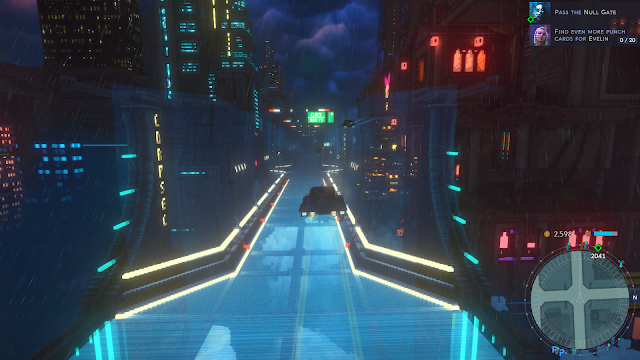 This is where the game quite literally shines. The atmosphere created - the brilliant colors, music and sound effects and ambient life - combine to create a world that feels chaotic and alive. You see flickering neon signs, lights and roadways shining around you as various advertisements play as you pass them by. The sounds of the HOVA's engines and other ambient environmental sounds fill the air as an electronic musical beat in the vein of Vangelis acts as a metronome to the world that created it.

This awe continues once you land at one of the many different parking zones around the sectors and you set off on foot. People walk around the streets using Holo Cash machines and vendors forcing you to wait. There are vendors and merchants to buy food, clothing and other items at. There are various people to talk to to help flesh out the world. Moving platforms and bridges and walkways allow you to traverse the area and sometimes need repairs. In short, the world feels alive.

The city is divided up into a bunch of unique districts that mirror certain areas you would see in many large cities - Chinatown, Midtown, The Hallows, etc. - which are a reflection of the class and race divides the real world. They all have their own varied architecture and all of them are wonderfully lit up in gorgeous neons, even if what's inside may be a bit seedier and downtrodden. Advertisements adorn their walls and the walkways set out front of the buildings which are all raised high above the clouds below. The voxel graphics giving the game a 3d sprite feeling that fits perfectly within this game. 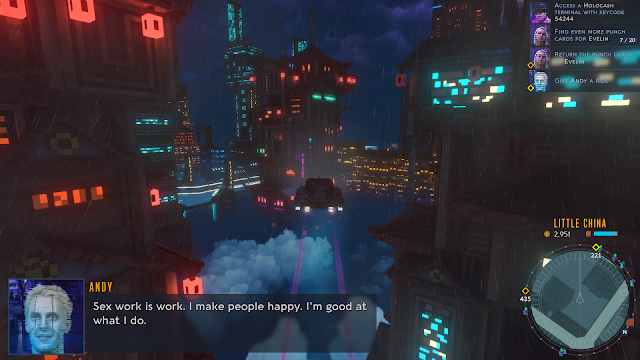 The sound effects only help to build up the wonderful visuals. As you fly around you will hear the engines on the HOVAs buzz and zoom by like something out of The Jetsons. On the streets, people hold conversations as audio advertisements reach out to grab your attention from somewhere overhead. Crashes and creaks of the straining buildings sound off around you. Even the voiceovers, which sometimes fall a bit short, add to the world around you because of the characterization in each of them.

There's a lot you can do in this game, but sadly it doesn't amount to much. What can be done, I wish was able to be done even further. For example, you collect various items scattered around the city that can be sold for credits, used to repair lifts, open doors or given to various characters around the world which sounds like a ton of options for your character to make a choice. However, when you actually do any of them you'll realize they don't really do anything. 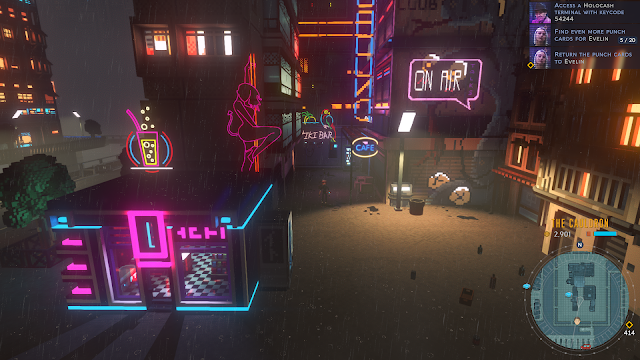 Through various collecting around the city I found a few old video games and eventually ran across a video game collector in one of the sectors so I gave these items to her. She recounted the history of the games and then asked if I wanted to play with her which would have been a wonderfully random moment of interaction with a character in the world by inserting a mini-game we could have played together, but my character said no and there was no more of it.

You can repair platforms and open doors with some items which generally only leads to more items. Most of the time you will just sell the items for credits with a merchant. With these credits you can buy food, drinks, clothing and upgrades for your HOVA, among other random useless things.

The food/drinks are supposed to make you run faster (if I'm understanding the icon correctly), but I never saw any increase or any use for it so I stopped buying food altogether. You can buy clothing for your character but it's hard to see much change in the color of your jacket, boots or shades in the city darkness so I quit buying from merchants. That meant the only thing I spent my credits on was buying upgrades for my apartment that I couldn't interact with plus fuel, upgrades and repairs to my HOVA. 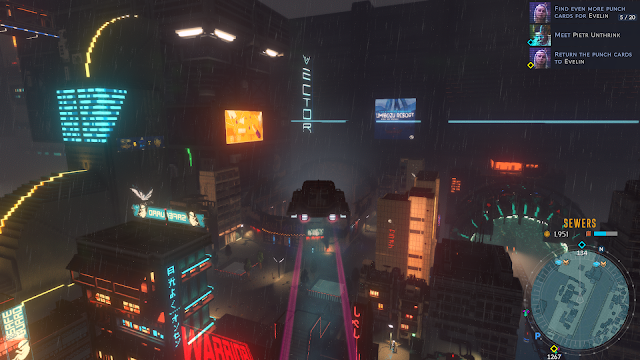 Your HOVA can take damage by ramming into other HOVAs (even the CorpSec - the police), but you never ever get in trouble for this. Yes, you take an unidentified amount of damage, but there is no fine for rampaging across the roads. There's no speeding. Nobody even reacts to you. It's just a literal and figurative vehicle to get you from point A to point B. This makes the long deliveries across multiple sectors boring as you're just mindlessly driving to get from interaction to interaction.

Aside from a few main characters, most of the people you will encounter in the game, while interesting, are just tools for dolling out the information that will help build the world around you or help you, the player, learn something about your character. Their stories, much like themselves, come and go from your life like tears in the rain.

This wouldn't be an issue for me but there are no dialogue trees. When you choose to speak to a character you are locked into a conversation which I had a hard time feeling involved in especially when I was automatically giving credits or an object to a person I didn't care for. I just wasn't invested. Their long dialogue was nice when I was on those long trips across sectors, but it wasn't when I wanted to interact with something five feet from me and I had to wait until the talking was done. 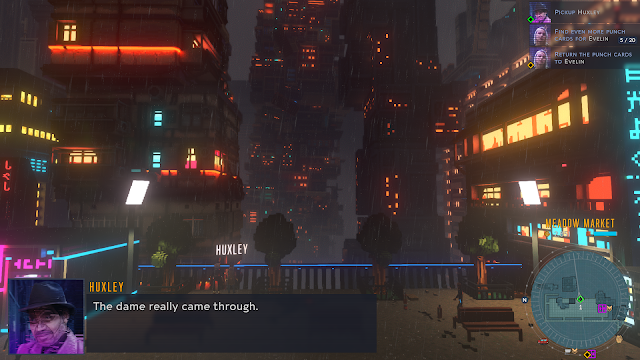 The same goes for the game world. Despite having a large open world to traverse in, you'll find yourself on a linear path travelling from sector to sector doing singular missions for Control or other characters while gathering more of those collectible items. Rarely will you get a secondary mission, but when you do they are only a one destination stop that feels like it's over before it began. Most of the time you'll be trying to avoid pinballing yourself on the open roadways as you travel from sector to sector. More than once I wondered if the game wouldn't have benefitted from less horizontal movement and more vertical so there was less bland travel time.

It isn't until the main story of Cloudpunk starts coming into focus hours into the game that everything starts to make sense. It is a slow burn largely relying on the environment to help tell the story of a city falling apart from age and misuse of the corporations and various individuals. It's a story that has been told to you by the various citizens of the city if you have the patience to sit through the conversations. A story of survival and redemption. A story of loss and of love. Through the various interactions you'll begin to understand the burdens the city and it citizens face, and the hard choices you'll have in front of you. 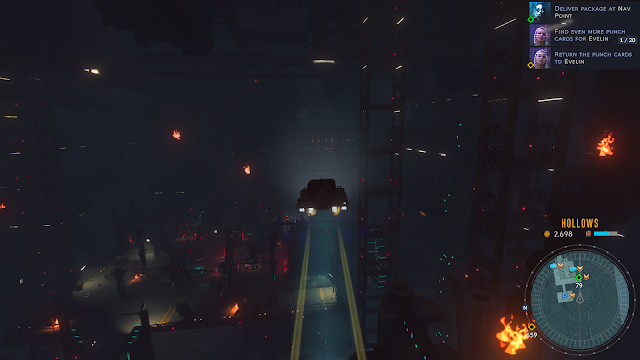 All said, the negatives of the game are actually a positive in some sense. You want to dive deeper into this world because it is beautiful and seems engaging, but the negative is you can't. A lot of the time it feels like you're looking in on a snowglobe. You can see inside and there's a beautiful scene unfolding before your eyes, but when you crack into it the globe shatters and you realize that it's not real and ultimately empty.

Some things are meant to be enjoyed from a distance.
Labels: review video game