Home Sweet Home Episode 2 is anything but sweet 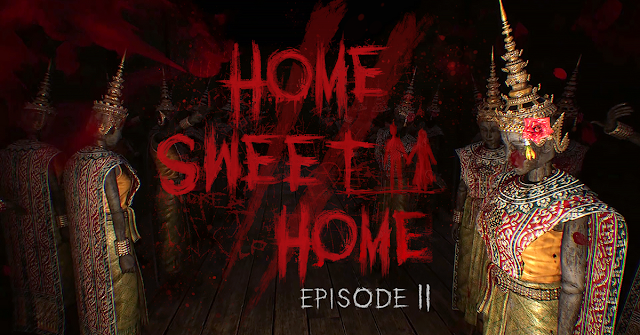 Home Sweet Home Episode 2 is the sophomore followup to Yffdrazil Group's 2017 horror hit Home Sweet Home. Unfortunantely, even though it looks and mostly plays better than the original, a lot is lost in the translation from paper to screen.

In October of 2017 I was looking for a spooky new game to play on stream and was quickly lead by my community and fellow streamers to an independent Thai game called Home Sweet Home in which you assume the role of Tim, a man who wakes up in a hotel room only to find himself on a horrific quest to find his missing girlfriend. What followed was cross between a traditional slasher movie and japanese horror film that stumbled in some parts, but largely worked due to its unique voice and creepy hide-and-seek mechanics as you evaded the constant threat of the boxcutter girl.

Fast-forward two years and Yggdrazil Group Co., Ltd have released the second episode that picks up shortly after the first game's controversial cliffhanger ending. Unfortunately, where the first game felt like it had a unique voice and story to tell the second comes off largely like a safer, incomplete attempt to recreate the magic of the first.

You start the game off waking up worse for wear in your apartment after having a nightmare of your girlfriend Jane who went missing in the first game. Exploring the apartment allows you to catch up with the timeline since the first game and you find out your character has become not only obsessed with finding Jane - so much that he has been suspended from his job - but also a raging alcoholic. Despite it all, he still has not able to find her even with the police on the case.

Your only only objective as you start the game and main objective throughout is to find Jane as you progress through varied and horrific settings seemingly spawned from her nightmares which are brought to vivid life through her diary entries you find scattered throughout the game. You'll also find the games inventory items - keys, torn photos, health berries, and other items - in a similar fashion. This is where the game both excels and begins to fail.


The graphics and setting have been much improved from the first game. Where number one was set almost entirely inside buildings, the second game seemingly wants to get you outside which allows it to show off lush forest, swamps and other Thai locals complete with weather effects, fog and lighting because the game is set at night. Of course, it does drive you indoors on more than one occasion putting you in dark, cramped hallways and rooms that hold their own dangers and mysteries.

This also allows you to fully play around with the controls which feel more fluid than I remember the first game having, even though there's nothing out of the norm from other horror or first-person games here. You can move using the W, A, S, D keys and look around with the mouse. You interact with objects using the E key and crouch, peek over objects and run.

Unfortunately, the setting and design also lead to a lot of the major failures of the game.


A lot of what the game tries to teach you it does so late or doesn't reinforce common themes for you to learn. For example, I began interacting with objects using the E key before the game told me how. Almost at the same time I learned how to crouch and peek over a wall (using the spacebar and mouse) I was being attacked by a 'Lost Souls' reject from Doom that I was supposed to hide from. I found out I needed to sneak through an area with zombies (made even more apparent by the game taking away my ability to run) before the idea of sneaking is given to you as an option, but I never had to do it again. The abilities of the Big Bad are excessive (which I'll get into later) which lead me to just letting Tim die and me reloading rather than going through the prescribed method of button mashing and running to no avail. It just doesn't seem to balance out correctly, and that affected the overall gameplay for me.

Level and puzzle design range from great to boring. The first time you encounter the mannequin/armoire puzzle and figure it out you feel great because it feels like an natural puzzle that you actually used your mind to solve. When you have to search a building for numbers that have been painted on the walls in order to unlock a door that exists to solely block your path you start to wonder what spirit bent on tormenting you has gone through this much trouble to put this puzzle in your path? Sadistic developers, that's who!


In fact, a lot of the level design is set up in this same way. You will weave your way around storage units and dividers that have been conveniently put in your path for no other reason than to give you a maze to walk around and to lengthen the play time even though your character is doing nothing more than walking through a building. Doors are plentiful in these buildings but come in an openable, locked or barred state making the maze even more confusing and making you wonder if you're going in circles or to a dead end.

This, of course, is all to set up the big bad of this game. Where the first game had the boxcutter girl chasing you who forced you to climb into lockers to avoid her deadly intentions, this game has you avoiding the Geisha girl from the end of the first game. Much like the first game, Geisha girl will appear and torment you while you are trying to carrying out whatever trivial task is set before you. This time instead of using pools of blood to teleport, she uses statues.


The negatives I encountered with Geisha girl is when she attacks you have to rapidly hit E to break free from her, but that doesn't happen until she drains at least 3/4 of your life no matter how hard you bash that key. Afterward, you need to heal up and run to safety away from statues/her line of sight but she teleports at a speed that makes it almost impossible to get away which means if you are caught a second time you are surely dead. If she pulls you out of an armoire you are hiding in she turns you to face her and the armoire so by rapidly tapping E to get away you inadvertently hit E to go back into the armoire only to be pulled out by her again and killed. It's actually faster and simpler to let her kill you and load the last save game to continue your adventure rather than fight against the inevitable.

This all culminates in the final area where you actually have to face her in a room full of statues that is something pulled from my nightmares not because of anything horrific, but because of how terrible of an experience I had playing it. Mannequins will point at a statues she will appear at and you need to triangulate this position and pin her spirit to that statue with Holy Nails and then cut her with a knife (for whatever reason). You repeat this a certain amount of times to finish the game. Of course, as previously mentioned, she can teleport and show up at these statues at any time and she will change which statues she shows up at even if you nail that statue so if you try to attack the new statues, a large majority of the time you will be too slow and get attacked. The number of statues in the room means that even if you get away she will find and kill you a second time forcing you to start all over. It's frustrating.


I realized I just said horrific and the most horrifying part of the game is its design. That is sad.

I haven't even mentioned the mishits when swinging Holy Nails at the Big Bad when trying to pin her body to a statue; levels that literally load part way through complete with black screen making me wonder if I had died or caused an error; the other objectives (other than 'Find Jane') that are super trivial ('Open the door.', 'Find the way out.', and my personal favorite: 'Run!!!'); a story that tries to be something bigger than itself when it's just a simple tale of two sisters, one of whom is taking a rivalry too far; and of course another ending that isn't even a cliffhanger - just an abrupt end that doesn't give you any reward for the task of taking down the Big Bad. Yes, once again that simple objective of finding Jane still goes uncompleted!

At this point (once again) I found myself questioning my decision of purchasing this game. As a horror game I did not find it scary. As a puzzle game I only found one, maybe two puzzles well thought out. As a walking simulator I got bored way too fast as the story didn't have enough meat for me to be interested (there is no ending, again!) and the antagonist is just an evolved but frustrating rehash of the original.

Overall, there are many better horror games out there for you to play even at full price. If you still want to play this game I would say wait until all the episodes are released and heavily discounted before you do so.
Labels: horror review yggdrazil group