My first days on Mars 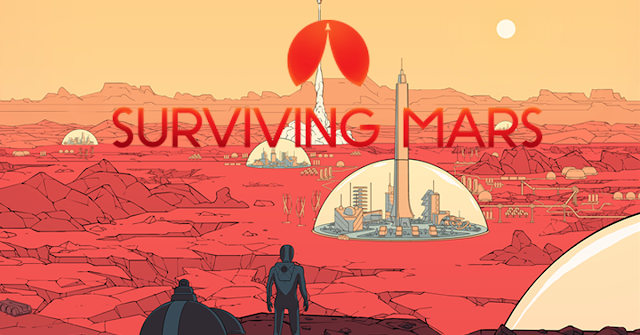 Tasked with the survival and growth of the Mars colony, you must balance a heap of issues on your plate in Paradox's newest space survival simulator that mostly flies high with a few hiccups along the way.

I have been eager to play a civilization building game for a while now but because my back list of games in my library continues to grow I have been hesitant to pick up any game that may require a large chunk of time to learn and finish, but when GOG was gracious enough to gift me with an early copy of Surviving Mars by Paradox Interactive, I jumped at the chance.

Surviving Mars is a survival/colony building simulator in which you build and maintain the first colony on Mars which, as you can believe, is no simple task. From the start you are given a ton of options that open up the game to replayability and customization in the form of choosing your mission sponsor, commander profile and a mystery each giving you varied starting resources & money, benefits to the colony and story mode (if you want one) respectively.


After choosing from a slew of landing spots on Mars, you set off to create your first colony. In the beginning you are given some hints at what to do, but are largely left on your own to do what you want, an apparent common theme among Paradox games. For some this could be a big turn off, especially with such an open-ended task in front of you, but for those familiar with these games or willing to take their time and follow the breadcrumbs in the form of small tooltips, they will find their way just fine.

It’s in this learning that you really begin to feel like a leader, almost as if you were a new, untested commander thrust into the spotlight by an eager corporation wanting to beat others in a space race and left to your own devices. You will develop your space legs and eventually your own leadership style, or you will perish and try again.


Of course, this is only the beginning training you on how the game mechanics work. A power source (solar panel) must be connected to a power consumer (a factory) using power cables. Water and air production factories must be connected using pipes to either storage tanks (highly recommended) or directly to domes. Basic knowledge leads to more advanced knowledge that you will either apply to your next construction project or your next game. All-the-while you can get support from your sponsor back on Earth through supply shuttles that will deliver much needed resources, but be careful not to burn through your sponsorship money too fast or you will find hard times fast.

After the game deems you competent enough to keep a lifeless colony in working order, you are given the chance to bring your first colonists to Mars through the use of passenger shuttles. This adds a whole new level to the game as you have to micromanage your colonists stats while looking at the overall production of your entire colony as well. They, of course, go hand-in-hand as your colonists run some of your machinery like the metal extractors, machine parts factories and research labs; but they also keep other colonists alive and in good shape by working in infirmaries, diners and schools. It’s this ebb and flow that, when it’s working, makes you feel like a god. But the game doesn’t do you any favors in this department.


For all the talk about the game focusing on your colonists surviving, there is very little in terms of UI elements to help you keep track of this. There is a general “Colonists Overview” menu that gives you the average of the colonists health, sanity, comfort and morale; however, if you drill down to individual stats you will start to see a different, a sometimes scary, picture amongst your colonists.

If your colonists stats get too low they will die, commit suicide, become a renegade, can become homeless or a slew of other things that don’t bode well for your colony, but you don’t have any easy way of knowing how they are really doing. I started to devote some time, after a certain number of Sols, to pause the game and go residence-to-residence and click on each colonist’s avatar to bring up their stats to see how they were really doing rather than trust the games wide-brush approach to giving you stats. This is literally the easiest way to micromanage all your colonists and is a pain for sure, but better than letting everything go down the space-toilet.


If your colonists don’t like working during the night or going outside the dome to work you better reassign them. However, it’s not as easy as dragging their avatar to a different work shift. The only way to reassign them to a different shift is to turn two of the three shifts (morning, evening, night) off, then turn on the non-night shift and check if the person-in-question was assigned to that shift before turning the night shift back on. Luckily, it is easier to assign the workers to a new job with a click of a button.

Ultimately, the entire game operates like that. Your drones operate through drone hub based on a three-tier priority system. The drones will build and maintain those on high priority first and low priority last. Beyond that it’s not very intuitive unless you want to shift priorities back and forth. If you want them to quickly fix your failing power systems you’ll most likely use the rover — a mobile HQ that can have up to eight drones assigned to it for individual tasks — as long as the resources are within reach or just manually grabbing some drones yourself and making them do it as the other options take too much time. Of course, there is no click-and-drag grab for a group of drones so you’ll have to individually click on drones to have them perform your task.


UI issues aside, the AI seems to be fairly competent. If you stop fighting the game mechanics and work within their parameters, you will find a large and largely enjoyable game filled with anomalies to discover and hurdle after hurdle to work around. The AI will take care of all the heavy lifting and you’ll adopt a multi-headed leadership role of taking care of issues as they pop up, doing preventative maintenance when you can and preparing for the future and what that will look like.

Overall, I enjoy the game and will continue to play it, but I understand the negative feelings toward the game as the UI decisions I mentioned above shouldn’t add to the difficulty of the game as they currently do. The UI should be there to aid you in your task of building the first city on Mars. There’s no doubt that modders will quickly mod the game with the included mod editor, but is that what you pay $40 for or should it have been there from day one?

Ultimately, I can tell you that underneath it all there is a solid game of micromanagement even if the current UI doesn’t allow you an easy way of tracking it. There is a ton of replayability even before you begin in the form of choosing different sponsors, commanders, mysteries and landing zones. Even going about different ways to build your colony could result in different outcomes as I realized in my current build when I placed domes too far away from each other. For what the game lacks, I await the flurry of mods that are sure to be coming to fill in the gaps that the devs left. Remember, even AAA games such as Skyrim are released full of bugs and other errors only to realize their full potential through modding.

As with all Paradox Interactive games, there is certain to be a lengthy future for this game complete with multiple expansions (2 planned as of now), content packs (also 2 planned right now) and the aforementioned modding community, and it’s a future that I am now a part of.
Labels: review video game