Friends unite: A Way Out review 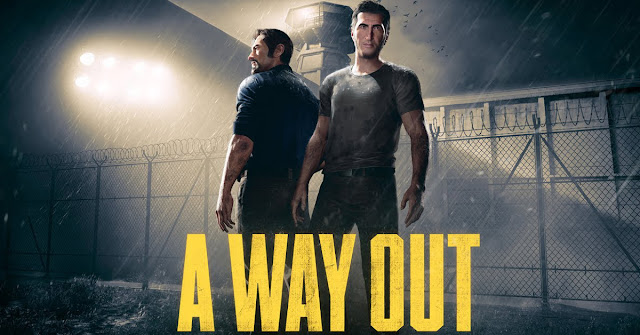 FatsackFails and I got together to play the newly released co-op adventure game A Way Out and give our collective, real thoughts on this unique game.

A Way Out is the newly released cooperative action/adventure title from Hazelight Studios, the same company that created Brothers: A Tale of Two Sons, and released by EA. Being a game that truly embraces co-op gameplay — you need to play with another person — I figured there would be no better opportunity to get together with FatsackFails and dual-stream this game, which is exactly what we did for over eight hours Friday night/Saturday morning.

I also felt that being a cooperative game, we needed a cooperative review of the game as well. Here are our honest thoughts about A Way Out.

Resonant Drifter: When I first heard about A Way Out at E3, I was intrigued. If done correctly, it could be a fun, creative way to play a game with your friends — a sort of modern take on old-school cooperative games that I played in my childhood. If done poorly it could be a gimmicky and frustrating way of putting two people through a situation that would have been easier with one. Luckily, I feel A Way Out cleverly side steps the latter category.

Fatsack: I had not heard anything about the game prior to its release, so I went in blind with little expectation. I’ve played my fair share of QTE based action adventure games, and the novelty of playing it split screen co-op with a buddy intrigued me. The fair price point, ($30 on EA Origin) and the fact that Drifter and I could play the game together with only 1 copy of the game convinced me to try it.

RD: Yeah, I think it was a really cool idea that, considering it was a cooperative game, only one person had to buy the game and then could invite another person to play it with them for free. That, along with the price, made it really easy to split the price among two friends and play together. The free thing I believe is only good for one play, but it’s better than nothing!

FS: I enjoyed the two characters and how the game differentiates their personalities with how you interact with the world. Vincent and Leo can talk to the same NPC and have two wildly different conversations based on how they react. It was cool to see two distinct voices working towards the same goal using whatever skills or talents suited them best.

RD: I agree! This was most prominently shown in the scenes where the two had to make a major decision. Both players are prompted with the issue and have to agree on one of two ways, but it’s also shown with interactions with the NPCs as you said. We kept running around the scenes and comparing what we had done because people would act/react so differently to each character.


FS: One thing I enjoyed about the game were all the different characters Leo and Vincent interact with. Each one of them had their own personality and each conversation with them was a glimpse into their life. One NPC was a pregnant woman waiting in the hospital. When Leo spoke with her the conversation was about the gender of the baby, Leo guessing it to be a boy and the woman demanding that her psychic confirmed it was a girl.

Vincent’s conversation with the woman uncovered more information about the woman’s deadbeat boyfriend, who wasn’t with her at the hospital. This had no impact on the story at hand, but it was nice to see all of these minor characters fleshed out and more fully realized than you’ve come to expect from nonessential NPCs.

RD: Yeah, I think we both agreed that it would probably get old on another playthrough, but first time through it was a really nice feature and made for some lighter moments in between what was a rather serious story. I especially liked how the split screen always gave viewers something to watch because while one of us was talking with an NPC, the other would be wandering around the scene. I found myself glancing at your screen more than once.

FS: Another pleasant surprise for me was how smoothly the interactions with these characters moved between interactive dialogue, cut scenes, and even full blown QTE set pieces. It never really felt jarring or like the control had been ripped away from me.


RD: This plays into the cinematic nature of the game which I loved. The screen would shift to give focus on the character progressing the story. If both characters were involved, the split screen would go away giving focus on both. In one scene the two are being chased by a trained killer and the scene shifts in multiple ways to creatively fit the action on the screen while keeping it easy to follow.

FS: During a particularly intricate chase scene (of which there are a few) through a long hallway the camera shifted to a side scrolling perspective and followed Leo as he made his way across fighting off his would be captors hand to hand. There’s another chase scene in a different part of the game where the camera goes super wide and above the characters as both Leo and Vincent chase someone down.

It was a lot of fun to play these sections and was impressive to see the game take creative liberties with how to utilize the camera to tell the story.

RD: I think this brilliance is part of what made this game especially fun to play. Shifting the camera around kept things fresh and exciting; very movie-like. Sometimes it felt like you were playing a different game altogether.

Speaking of other games, I would be remiss if I didn’t mention all the mini-games they have placed around the scenes that we more than had our fair share of.


FS: I beat you at darts, Drifter! And Horseshoes! And Arm Wrestling! And the Arcade Game! Ha ha. Although you did school me at Connect Four, the Wheelchair Balance game and Baseball.

RD: Lol, that arm wrestling was killer on my forearm!

These mini-games help to break up the game’s story, but also keep the game competitive not only between Vincent and Leo but between the two players controlling them. Everything in this game takes advantage of the fact that two real people are in control of the characters and plays on that through decisions needed from the main story to mini-games played.

FS: Overall I had a blast playing this game with Drifter. It accomplished its goal making me care about Leo and Vincent’s stories and showed the camaraderie between the two build as Drifter and I strengthened our own friendship. The game play was fun and exciting; the story was interesting and the pacing wasn’t afraid to have slower moments to really juxtapose all the action laid throughout.

I don’t want to spoil the ending, as I believe the game is best played with as little knowledge of the story going in. However, I will say I thoroughly enjoyed how the game builds up the game play and subtly hints at the conclusion of the story through it’s mechanics. By the time the climax of the game comes to fruition, Leo and Vincent have accomplished the unthinkable thanks to the teamwork and collaboration between Drifter and myself.

RD: I didn’t think I was going to enjoy this game as much as I did — It knocked my socks off! I was caught up in the story and invested in the characters which lead to some really difficult choices. Having my friend on the other side and considering what we had just been through for the last eight hours made decisions even more fun and challenging. Like you said, looking back at how the game reinforces some concepts throughout was brilliant.

I don’t know if I’d feel the same way in another playthrough as talking to everyone again may feel old, but I’d love to see how the other side of the decisions we didn’t chose play out.

And I’d like to redeem myself in some of those mini-games.
Labels: adventure coop hazelight studios review