Chasing Battles Into the Night 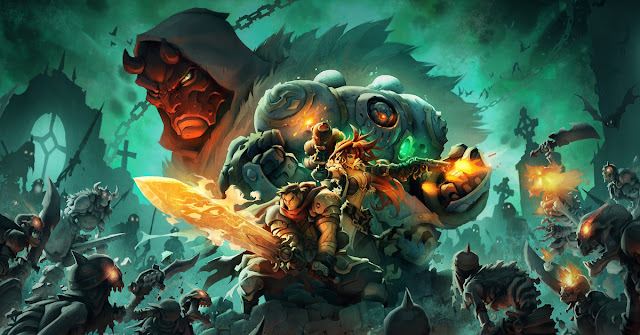 Battle Chasers: Nightwar is a fun and surprisingly strategic team tactics RPG that is taken straight from the comic books, but don't fret if you've never heard of them like me because you will find plenty of enjoyment in this thoroughly enjoyable strategy game.

I heard great things about the game Battle Chasers: Nightwar by Airship Syndicate, but it got pushed to the bottom of my ever-growing “must play” games list until I was lucky enough to be gifted it from a viewer in my channel, Doinglurkstuff. I couldn’t have been given a better gift.

Based on the short-lived 1998 comic book series by Joe Madureira, BC:NW is a turned based strategy game telling the story of Gully, a 9 year-old with extremely strong gauntlets and fortitude for days, and four of her companions as they search for her father, Aramus, on a strange island.

Although all games are vaulted forward on the back of their stories, the story to Battle Chasers: Nightwar really isn’t anything too special. It is, however, enough to keep the game moving forward and give you plenty of cool enemies to fight which is great because the strategic combat is where this game truly shines.

All five of the original members of your crew — Gully, Calibretto, Garrison, Knolan and Red Monika — and the sixth addition — Alumon — have their own distinct personalities and matching combat styles from the standard pool of healers to tanks to damage dealers. The game gives you room to grow your characters uniquely within this system by upgrading different perks from two different trees and enchanting equipment with different enchants along with equipping a slew of different armors, weapons, trinkets and so on. The options are great.

The game only allows three members to your party which means you have many different options of how you want to build your party and by what I read in the forums everyone has their own “best” team which means there is a lot of replayability in this area.


In the end I opted for Calibretto, Red Monika and Alumon and never turned back. Their collaboration on buffs/debuffs along with critical strikes, attack power and healing just fit perfectly with the way I played the game; however, I definitely can see how using different characters can change how you attack the game, especially when it comes to some of the later and larger boss battles.

You start the game traversing an overworld map on roads that lead you to one real town and many random combat encounters, dungeons and other locations around the game world. Essentially you will be moving back and forth from the town — your home base with an inn, blacksmith, alchemist, enchanter, hunter and collector of rare goods — to rest and restock, and other locations on the map where you will gain experience, goods and progress the story.


Don’t let this benign description make it sound like the game is a 2-dimensional wash. The hunter in town gives you side-quests which will help gather important items for use later on in the game. Treasure maps found in the dungeons will help you find… well, treasure. You can alternatively choose to fish in some (or all) of the many fishing holes around the world to get items to trade to the Fishmonger. There are also characters you will run into around the world that you will be able to help along the way or give you additional quests.

The largely randomly-generated dungeons not only give you experience but greater loot the higher the difficulty you choose. You are allowed to choose between three difficulties before entering the dungeon giving you greater rewards at higher risks. They also have varying content when they are generated which helps keep them from becoming repetitive. I tended to go through the dungeon first on Heroic to finish it, then I would go through it on Legendary for the better loot. I was surprised to find completely new sections of lore that I didn’t see my first run. Lore is made up of (usually) four notes spread around a dungeon that gives you some backstory on characters, the world, etc.— find them all and get a reward.


In fact, there is little in this game that doesn’t reward you. The more of the same enemy you fight, the more information about that enemy you unlock allowing you better insight into how to fight it and giving your party better percentages in battle. You thought the hunts were just for experience? Nope. they will help you unlock your burst powers (ultimate moves) and, finally, the things needed for your characters’ legendary weapons. Everything seems to have its place.

That’s unfortunately why the few bad little things seem to stick out more than they should. For example, you won’t officially unlock an enchanting table in the town until after you complete the sixth dungeon, but having enchantments available to you early on is obviously a huge bonus — almost necessary. You can get one earlier if you enter a dungeon (should be a finished dungeon) and, after finding the table, leaving through the front door. This locks the dungeon in a perpetual state of incompleteness giving you full access to the table at any time, but finding the table in the randomly generating dungeons can be a series of trial-and-error which leads to frustration.


That, however, can be overlooked by not searching for a enchanting table early (again, even though it’s highly recommended). Something that is harder to overlook is the errors in math during combat. There are instances where an attack is supposed to do a certain amount of damage but does much less and there’s no indication as to why or a debuff that is supposed to strike once at the end of your turn but it actually hits twice but only on one of your characters. It’s these little things that turns a player from a great tactical general into a ball of insecurities because something you thought you understood suddenly flips you on your head.

Luckily, you learn to live through and plan for these small things and you begin to overcome them as you would any other obstacle in the game and begin to enjoy the game as you should have all along from the beginning. This is helped greatly because the game is so light. Your characters paths — the points you spend on their perks, enchanting weapons and armor — are not permanent. You are always able to switch these out to try get the most out of your characters. Your characters don’t have permadeath, they just get knocked out, so you don’t have to worry about permanently losing them. This lightness in the gameplay is a welcome step away from some other more stressful strategy games in the same genre.


Other things that help are the great graphics and soundtrack. The visuals are reminiscent of the graphics found in earlier titles like Bastion. They look painted and very colorful, a nod to the comic books I’m sure. The characters are all interesting and wonderfully thought out. The boxer’s knocked out animation is perfect for how you think (or know) a boxer would get knocked out. Again, it all fits.

The soundtrack is an amazing collaboration of modern rock and fantasy that helps drive the game forward, keep it interesting and keep your blood pumping at the same time even if things start to get somewhat repetitive.

The bottom line is this is one of the most enjoyable strategy games that I’ve played this, if not the last few years. The combination of interesting characters, great strategic gameplay, beautiful graphics and music make this a successful strategy game that I highly recommend to any fan of the genre. I’m hoping they are truly working on a sequel as they hinted at because I will be one of the first to pick it up.
Labels: review video game