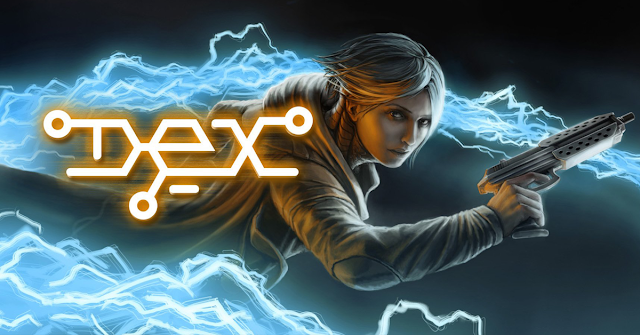 A cyberpunk side-scrolling role-playing game set in the fictional city of Harbor Prime, Dex puts in the boots of a citizen named Dex who is wanted by an overreaching powerful organization who wants her for unknown reasons, but will she turn friend or foe?

The steam summer sale came and went, and I picked up (more than) a few gems for a great price. Being a fan of the cyberpunk and dystopian genres, I had my eye on a certain cyberpunk action role-playing game for a while by the name of Dex. When I realized it was on sale for only $4.99 (down from its original price of $19.99) I had to pick it up.


Dex takes place in the distant future and puts you in the boots of a blue-haired hero, Dex, as you are awoken one night by a voice in your head telling you to get out of your apartment because “they” are after you. In the next few minutes (which also act as a tutorial) you learn that you somehow possess the ability to hack into electronics without the need to “jack in” (access via a cable in the back of the neck) which leads you on your journey of discovery.

From this venture, like other role-playing games, you progress through the main quest line while grabbing up side quests from various NPCs throughout the city, and what a city it is. Divided up into thirteen distinct sectors and brimming with unique locations and people (oh what interesting people!), Harbor Prime (the city) is truly one of the biggest and best characters in the game.


The side quests are, for the most part, more interesting than your usual RPG fetch quests thanks in large part to the wild characters and locations that you meet and traverse through which helps in the longevity of the game. The main quest is, for the most part, a combination of tried-and-true tropes, but mixed with the previously mentioned characters and locations it feels somehow unique and special.

This is, of course, all accentuated by the great visuals and audio in the game. The grungy, neon atmosphere that the game creates is superb. Swirling garbage on the street, homeless huddled around a burning garbage can and wild dogs running free in the Chinese Quarter compare drastically to the clean lines and manicured trees of the Highrise. Like any great dystopian future, the streets always feel busy — the crowds of people walking on the other side of the sidewalk in the foreground are a nice touch. The characters you run into are all wonderfully voice acted that brings them to life which only adds to the the living, breathing city around you.

Of course, all roads in the city are not without their potholes, and Dex has more than a few. And let me preface this by saying I was using a controller for the entire game. I did switch out to the keyboard and mouse to test, but there really isn’t a perfect control scheme for this game.

Obviously, movement — jumping, running, rolling, etc. — is fairly wonderful using a controller. Aiming on the other hand can be a chore, especially when using a gun. It feels like the reticle wants to lock into one of eight positions even when your enemy can be 360 degrees around you forcing you to walk back and forth to accommodate for this loss in degrees. On keyboard/mouse aiming is brilliantly smooth but movement is a bit cumbersome. Pick your poison.


Combat, one of the necessities of the game, is somewhat of a mixed bag until you level up your character, and even then it feels sluggish — like you’re working against the system. The enemies feel like tanks because they block you shots and hit you with ease (and aren’t phased by your shots at all). Meanwhile you attempt to roll around them to bypass their blocks but you go too far which, in turn with their amazing promptness, leads you to only hit two of your three hit combo. Then you repeat. That is, of course, if they don’t knock you down with their power attack. It’s a dance with the enemy and with the controls that just doesn’t feel completely balanced and leads somewhat to frustration.

Once you level up your character things start to turn in your favor, but this isn’t until you are near the end of the game which seems logical but it isn’t a smooth progression. If feels more like a wall you must climb learning all your skills along the way but when you reach the top you don’t need them anymore because you are done climbing.

I couldn’t figure out some of the side quests (this entirely could be my fault or it could be that the quest goals aren’t labeled well enough), and as good as the story is, it does get confusing. The biggest culprit to this is because a majority of the explanation is left for the final chapter, the previous chapters encompassing the side quests and minimal story leading up to the main story. It comes at you with such ferocity it’s hard to take in. Even now I’m not entirely sure I understood what happened at the end.


Dex has a unique take on hacking, but I’m not sure if it’s all that successful either. Hacking is split up into two areas: AR (augmented reality) and when you are actually inside a computer system. In AR you are able to hack systems (cameras, guns) and even people (when you upgrade the skill) in order to disable them (people only for a short time).


Once you reach a hackable terminal, you are thrust into a Geometry Wars-like area where you must “fly” around and shoot enemy (anti-virus software, etc.) and download information from the computer.

Both of these systems are a welcome change from the running around in meat-space, but again has its share of frustrations. The rate at which enemies come at you, specifically one stationary turret that shoots little “drones” at you (some of which can shoot), is more than extreme at times. You can get three different variations of your main weapon, which isn’t explained to you, but using the controller to switch weapons (with the D-pad) isn’t easy when you are running away from enemy (with the left analog stick). Hint: you have to stop moving. You also get two programs that you can use — a shield and a nuke-type weapon — if you can afford them.


Overall, the game presents a really great atmosphere in a wonderfully developed city that fits right alongside the beautifully crafted characters. The combat and hacking can be a mixed bag, but invest enough time and patience in them and you can have them working for you to a better degree. I didn’t finish all the side quests so that along with the different leveling mechanics should give you enough content to do a replay if you can get past the frustrations.

It would be hard for me to not recommend this game at its measly price tag of $20 (especially since I got 19 hours of gameplay out of it), but I still feel hesitation. If you can find it on sale for anything lower ($15 or below) I say pick it up most definitely. There are a few bumps in the road, but Dex proves to be a largely enjoyable journey in the end.